The film starts with Machete Cortez (Danny Trejo) and Sartana Rivera (Jessica Alba) attempting to capture weapon dealers who have been supplying the Mexican drug cartels. The military men are then all killed by the gangsters, who in turn are wiped out by another intervening party. Its leader murders Sartana while Machete is arrested by a corrupt Sheriff Doakes (William Sadler) and Deputy Clebourne (Samuel Davis). Doakes tries to unsuccessfully hang Machete but the President of the US, Rathcock (Charlie Sheen), intervenes. Machete is brought to the White House, where the president offers him US citizenship if he eliminates Marcos Mendez (Demián Bichir), a psychopath who is threatening to fire a nuclear missile at Washington, D.C. if the American government does not intervene to stop the rampant drug cartels in Mexico and the corruption of its government.

Machete agrees and travels to San Antonio, where he meets his handler Blanca Vasquez (Amber Heard), an undercover beauty pageant competitor. She sends him to Acapulco to meet a young woman, Cereza (Vanessa Hudgens), who can lead him to Mendez. Machete finds her in a brothel run by her mother, Madame Desdemona (Sofía Vergara), who attempts to kill Machete before he escapes with Cereza. She takes him to Mendez's associate, Zaror (Marko Zaror), who kills Cereza before taking Machete to Mendez's base of operations.

There, Machete learns that Mendez has wired the missile's launch device to his heart and triggered its launch in 24 hours. If he dies, the missile fires. After killing Zaror he captures Mendez, intending to escort him to US and find a way to disarm the missile. Machete learns that Mendez is an ex-secret agent who tried to expose his corrupt superiors, only to be betrayed and forced to watch his family being tortured. The trauma drove him insane by creating his split personalities, as well as led him to join forces with the missile's creator.

Shortly thereafter, a hit is put on their heads. Machete is targeted by Madame Desdemona and her prostitute assassins, including a shapeshifting hitman called El Camaleón (Lady Gaga), as well as Doakes. Machete and Mendez manage to reach the US and kill Doakes and Clebourne only to be caught by a reborn Zaror and the same mercenaries who killed Sartana. Zaror decapitates Mendez and Machete is riddled with bullets by the gunmen.

Machete wakes up to find himself in a healing tank. He is taken to meet Zaror's benefactor—corrupt businessman, inventor and Star Wars fan Luther Voz (Mel Gibson). He shows Machete Mendez's beating heart, preserved in a jar, as well as informs him of his plan to manipulate extremists throughout the world to detonate nuclear weapons while planning to escape in a spaceship to rebuild society in space. Machete then escapes with help from Luz (Michelle Rodriguez), who had heard about the hit on Machete. She informs him that the only one who can disarm Mendez's heart is Machete's old enemy, Osiris Amanpour (Tom Savini). Machete contacts Vasquez, who instructs him to meet her at a rendezvous point.

Arriving there, Machete is betrayed and ambushed by Vasquez, who is in league with Voz. As she is escaping into the desert, Machete gives chase and jumps onto the top of her vehicle but falls off after gunfire comes through the roof. Machete is then given a ride by El Camaleón, who tries to kill him one last time. But he escapes and El Camaleón ends up being shot to death by a group of racist rednecks just inside the US border. Machete then reunites with Luz and her group, the Network. They infiltrate a fundraiser at Voz's base of operations. Machete realizes Voz was the one who killed Sartana and fights him. He severely burns Voz's face, disfiguring him to the extent that Voz is forced to wear a metallic, silver mask. Meanwhile, Vasquez shoots Luz in her good eye, completely blinding her. Luz kills Vasquez in return but is captured by Voz, frozen in Carbonite and taken aboard his ship.

Machete jumps on the missile as it launches and disarms it in mid-air, while Voz boards the ship and departs with the Zaror clones, his supporters, as well as Luz. The disarmed missile then plunges into the Rio Grande and Machete is rescued by President Rathcock, who asks him to follow Voz into space and kill him. Machete agrees and uses a SpaceX rocket to depart to Voz's Station in Earth's orbit, where he is given a laser machete to start his mission.

In a post-credits scene, an outtake from the Luz and Blanca fight scene is included followed by a shot of President Rathcock in front of a space background inquisitively brandishing two of Voz's guns (the molecular disruptor and the same pistol used to kill Sartana) before firing wildly at an off-screen target. 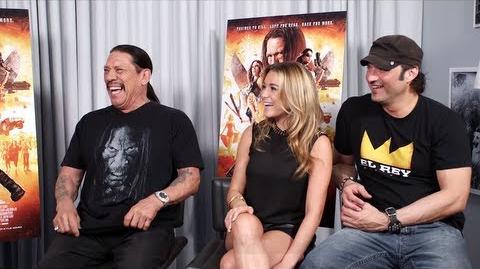 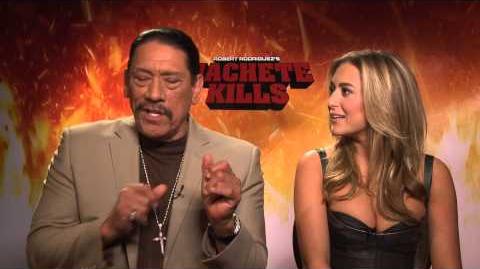 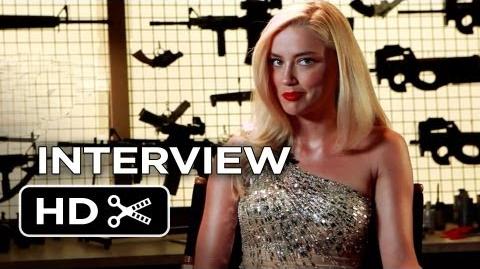 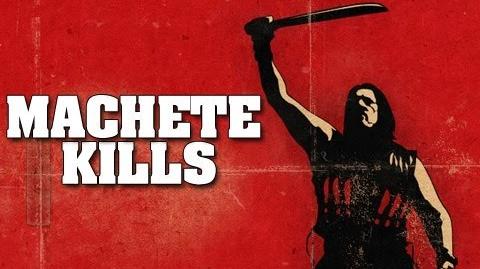 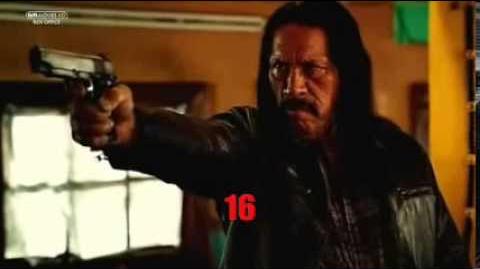 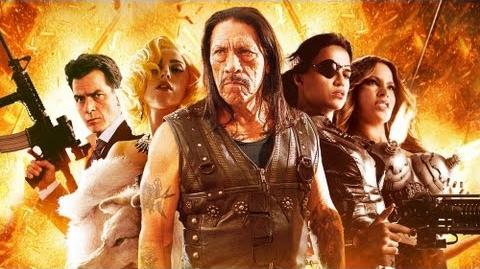 Retrieved from "https://machetemovies.fandom.com/wiki/Machete_Kills?oldid=5253"
Community content is available under CC-BY-SA unless otherwise noted.